If you are in the floor removal business, you will probably know what a Ride-on Floor Scraper is. For anyone who has no idea what we are talking about, you are about to discover one of the most innovative pieces of equipment that has revolutionized the commercial & industrial floor removal industry:

There are a number of features that make a Ride-on floor scraper solid. These features are weight, torque, travel/variable speed, and battery power. These elements working together create the best possible combination to optimize floor removal. We will focus on battery-powered models, as they are the most popular, but there are also propane powered Ride-on Floor scrapers used for different applications.

Weight is a key factor to consider when evaluating Ride on Floor Scrapers. The best example that we can think of to illustrate how weight affects the performance of a Ride-on Floor Scraper is to look at a hammer. Hammers come in all shapes, sizes, and weights. The reason for this is that some applications require little effort, while others require a lot of power. A hammer that is used for hitting large nails is heavier than a trim hammer. This is because the force needed to drive a large nail in effectively is greater than that of a lighter gage nail.

Ride-on floor scrapers work the same way. For floor removal, a lot of force is needed to take up the material efficiently. The heavier a machine is, the more down pressure that can be applied to the removal tools. Heavier machines with more down pressure make material removal easier.

Now, weight is very important, but without the appropriate speed and torque to move the machine along, it can work against you. 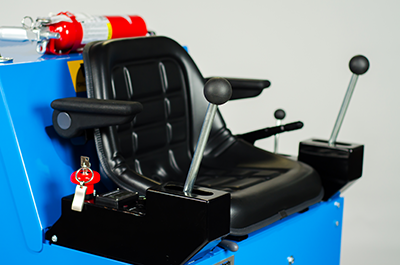 As mentioned above, speed and torque play very important parts in the production rates of these machines. If you have a heavy floor scraper with the appropriate speed and torque to move it along, you have likely found a great machine. Weight, speed and torque are characteristics that need each other to work effectively. Speed by itself has little effect on performance if there is not enough weight and torque behind the machine. You will either glaze over the top of material, or stop cutting too quickly once you are into the material, either way wasting time on each pass.

Another feature to look for when it comes to speed is whether the machine has a variable speed option or not. Many Ride-on Floor Scrapers have only a single speed option. The reason why variable speed is a necessary feature is due to the difference in floor material. More power is needed when removing ceramic tile than VCT. With a variable speed option, you are able increase or decrease the power output based on the job situation, providing you with the perfect combination for each flooring type.

When it comes to power, the worry is draining your battery too quickly. Some manufacturers have an ‘all day battery’ on some of their units which sounds amazing on paper, but the real question to ask is how much you can get done on a single charge? Imagine for a second: If you have a machine with a battery that lasts for 12 hours, and one that lasts for 6 hours, which is better? At first glance, you would probably say the one with the 12-hour battery. Now, if we told you that the machine with the 6-hour battery could remove material 50% faster than the other, you may have a different answer. If this were the case, you would be able to do the same amount of work in half the time. This would mean less labor cost, quicker job completion, and the ability to take on more work. (See graphic below.) You don't need to be a mathematician to see that using this simple equation can mean a large increase in the numbers that matter most; your profits.

Ride-on Floor Scrapers are amazing machines that have the ability to earn you a lot of profit. But you will need to investigate the key feature differences between each machine in order to make the right choice. Be sure to compare features like weight, torque, travel/variable speed, and battery life to make the smartest decision.

Added to your cart: